SHG Hotel Bologna also has a large private car park with video surveillance, covered and guarded garage, private garden, conference rooms of different sizes and capacities, breakfast room, American bar, laundry service, fax and photocopy service and the Rifugio Restaurant Pizzeria with summer and open terrace. until late in the evening: so that taste is the protagonist of your stay in the land dedicated to it.
SHG Hotel Bologna is located in Zola Pedrosa, a town nestled at the foot of the Bolognese Hills just 10 km from the historic center and close to the largest shopping centers in the city. The Hotel is a 10-minute drive from the Airport, and is located near the Pilastrino Metro Station, connected to the center of Bologna. The hotel is served by public transport, taxis, shuttles during fair periods and the surface metro (Pilastrino stop 10 meters from the hotel) which connects it to shopping centers and Bologna central station.

SHG Hotel Bologna with the breadth, the versatility of the spaces is equipped with 108 comfortable rooms with private bathroom, air conditioning, hairdryer, free wifi internet, LCD TV with satellite channels and Mediaset Premium, safe and minibar, will be the perfect setting for your stay, whether for pleasure or for work. A serene and familiar environment characterized by the exclusivity of the environments.

The rooms of the Shg Hotel Bologna offer a wireless wi-fi internet connection. 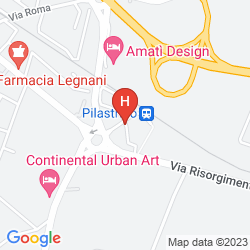