Overlooking the Grand Canal and located next to the Basilica of Santa Maria della Salute, the 5-star luxury Centurion Palace offers maximum comfort in the heart of Venice. The hotel's private courtyard provides the perfect setting for having a drink. Dating from 1892, the property combines modern interiors with original furnishings. Guests have access to a modern gym and a private dock for arrivals by water taxi. The Salute vaporetto stop is also located in front of the hotel. Tastefully decorated in neutral tones, the rooms feature beamed ceilings and parquet floors. All air conditioned, they are equipped with a minibar, a flat-screen TV and a modern bathroom with a bathrobe and slippers. The Centurion Palace serves a rich sweet and savory buffet breakfast every morning: the choice includes eggs, smoked salmon, cheeses and a selection of fresh fruit. The Antinoo restaurant also offers gourmet cuisine overlooking the Grand Canal. Dorsoduro is a great choice for travelers interested in museums, churches and photography. The 5-star Sina Centurion Palace hotel is located in the historic Palazzo Genovese in Venice, in the Dorsoduro district, and enjoys a view of the Grand Canal and an internal garden. Attractions such as the Basilica of S. Maria della Salute, Punta della Dogana (home of the Francois Pinault Foundation) and the famous Guggenheim Museum can be reached in a few minutes on foot. An ancient palace with a Gothic facade with exclusive design interiors: a contrast in harmony with the district where it stands, the oldest in Venice, which today houses the excellence of contemporary art. All meeting and reception rooms have natural light and a magnificent view of the Grand Canal. Outdoor furniture - Terrace - Garden - Menu for special diets (on request) - Possibility of breakfast in the room - WIFI - Paid massages - Reception services - Luggage storage - Tour desk - 24-hour reception - Entertainment and services for families - Daily cleaning service - Business center - Fire extinguishers - CCTV cameras outside the structure - CCTV cameras in common areas - Smoke alarm - Common room - TV area - Heating - Availability of soundproofed rooms - Bridal suite - Services VIP in the room - Family rooms available - Newspapers.

The rooms and suites of the 5-star Sina Centurion Palace hotel differ from each other. They were created by the architect Ciompi who designed the furnishings down to the smallest detail with a play of colors on the walls, fine fabrics and particular attention to detail. Many have large windows overlooking the Grand Canal, others overlook the internal garden. The bathrooms are in gold leaf and equipped with the most modern comforts. All air conditioned, they are equipped with a minibar, a flat-screen TV and a modern bathroom with a bathrobe and slippers. Complimentary toiletries - Bathrobe - Bathtub or shower - Towels - Household linen - Slippers - View - Tea / coffee maker - Wardrobe or wardrobe - Upper floors accessible by lift - Clothes stand - Flat screen TV - Electric kettle - Balcony - Sofa - Desk - Seating area - Parquet or wooden floor - Hypoallergenic solutions - Soundproofing - Heating.

The luxury hotel Sina Centurion Palace, in Venice, is located in the nineteenth-century work formerly known as Palazzo Genovese. It rises in Dorsoduro, in the area of one of the cloisters of the monastery of San Gregorio (second half of the 10th century), believed to be the oldest area of Venice, which over the centuries has undergone radical transformations, perhaps more than any other area of the city . The Sina Centurion Palace enjoys a unique position in Venice: directly overlooking the Grand Canal, next to the magnificent Basilica of Santa Maria della Salute, between the Punta della Dogana and the Peggy Guggenheim Museum. The hotel has a view of San Marco, the heart of the city, and is easily accessible on foot across the Accademia Bridge. AIRPORT: Airport: Venice Marco Polo - km 14; Treviso - Km 40. TRAIN: Railway station: Venezia Santa Lucia - km 1,5. CAR: Highway: A4 exit Mestre - 5 km. VAPORETTO: Vaporetto: line 1 Salute stop - mt 50. 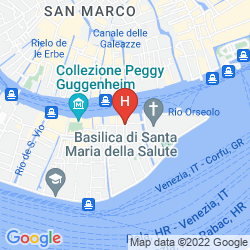