The Conference Center offers 4 fully equipped meeting rooms and can accommodate from 12 up to 98 people, while the spa offers GoldenSPA turkish bath, sauna, jet showers, relaxation area, indoor swimming pool, boutique, solar shower, a gym with Technogym equipment and booths for multiple treatments. ADSL internet connection is available in all rooms, while an Internet Point is available in the lobby.
The Allegroitalia Golden Palace is located in the historic center of Turin, between Piazza Solferino and Piazza San Carlo. Not far from Porta Susa to Porta Nuova, the Lingotto. The hotel is elegantly furnished, every room and piece of furniture is designed with extreme attention to detail and choice of materials. It is located 4 km from the Lingotto fairgrounds.

Flowers rushed toward the high ceilings, including reminders of the great hall Déco. And high-tech blends and enhances the art. Common thread between salt and environments of the Allegroitalia Golden Palace is the gold in a thousand interpretations of forms and materials. All'aurea, warm note of the wall precious pearl of reception desks and the concierge, can stand in the way the head of dark brown crocodile skin effect which is the reception desk. Aesthetics and functionality, creativity and artistic forms merge and enhance the technology. At the service and support for a revised structure of the past for the needs of the most modern and sophisticated comfort. In the quiet reading room, an Internet space with four seats, American Bar and a welcoming lobby, the personal shopper service to guide the paths on their preferences, a fitness center for hours of pure relaxation. This is live from the Allegroitalia Golden Palace hotel that also offers content to those who are sensitive to art: the statue by sculptor ieratiche Baglioni entrance, the bronze statues of Guerrisi in the garden, inspired by mythology marina, the videoscultura of Plessi for the hall, where the liquid metal creates metaphysical waterfalls, streams gold Lombardini, to mark the spaces of the hotel.

When it was built after the Second World War, Palazzo Taurus, which now hosts the only 5-star luxury hotel in Turin, Allegroitalia Golden Palace, was quoted in the most important pieces of architecture. An exemplary building for structural design and equipment, whose pictures were shown around the world. Modern, covered with stones and marked by a large number of windows (it was said one for each door), Palazzo Taurus was one of the jewels of the Study of Architecture Decker, at one of the more in view of the city, as a result contributed to the best technicians and craftsmen of those years. It was one of the first public buildings to install elevators with automatic doors and air conditioning. Designed in every detail, it also gave a well which provided regular water to cool air-conditioning, curtains and even in paper, placed between two glass panes and operable from the inside, according to a style in vogue in Nordic countries. Calabrese an artist, sculptor Michele Guerrisi teacher at Academies of Art in Rome and Turin, the statues outside the building, the sides of what will be the main entrance of the Allegroitalia Golden Palace hotel, and the statues of the fountain placed in the garden.

Olympic inspiration for the "time bar" where different formats of digital clocks tick off the seconds of the most important Olympic records and you can taste the rich and pleasant after-dinner aperitifs, in summer even in its pleasant outdoor area, a rarity in the historic center of Turin. Always inspired by the Olympic themes "Winner Restaurant", the prestigious restaurant of the Allegroitalia Golden Palace, where stands a huge buffet in the middle of the room with a garden where in summer you can dine and breakfast. The kitchen is in the expert hands of Gabriele Enrico. A menu of sophisticated naturalness proposes dishes that are light but do not skimp on flavour.

The hotel provides either its own car park or a nearby one with a special agreement; being not included in the room price, for a paid parking the payment have to be carried out directly on the spot. 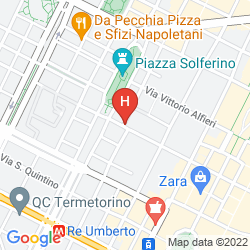